60 has me thinking about haiku for the 1st time since I was in elementary school. He’s issued a challenge for a 3 word haiku. To kill time while I was waiting for uploads this morning, I came up with one about a medical situation in the former Soviet Bloc.

And since 60 and I are both BL fans, I also came up with this one that compares Shatner’s legal and Starfleet careers:

Denny Crane says bye.
And Alan’s farewell is not
“Live Long and Prosper”.

But as my mind struggles for a post — I thought how about some marketing haiku? (Is there such a thing?)

TV commercials
are better when you use a
detailed storyboard.

Multiply the columns
by the advertisement height
to get Column Inches.

Billboards are not books.
Interstate drivers fly by.
Use just one idea .

As I write these, the cadence reminds me of past roadside ads:
Driving down the road.
Advertising used to be
fun with Burma Shave.

And might as well throw some haiku ads for myself in the mix (I could use them as Google ads):
A blog that is fun
and has great commentary.
Shotgun Marketing.

How about some marketing bloggers?
Hugh’s cartoons on Gaping Void.
Viral Garden‘s in Alabama.
Jaffe’s stuck in Second Life.

You’re next. Place your marketing haikus in the comments.

I should have written this post last week, but turkey trimmings demanded my full attention.

It takes market leaders like Amazon, Google, Apple, etc to move people to new platforms and new methods. It takes alot of energy and money to get people to pay attention to you AND for you to convince them to change their habits. You’ve won half the battle if you already have the attention like these major market leaders do.

The mobile web (currently best exemplified through the iPhone) will be where major growth occurs in the next few years. It will be the next bubble. And while Kindle is not technically connected to the web (it’s Sprint cell service) — mobile devices that can access content (music, media, etc) like Kindle will be the item that drives this mobile web phenomenon. The trouble is getting people used to the new methods of delivery.

For years, we’ve done a decent job of expanding and promoting content through the boxes that people are already used to. It’s not incredibly hard to get people to watch another show on the TV if they’re already TV users. Or to listen to another song on the radio…or visit another website on the net. They’re already there. You don’t have to move them that far. They’re in the house. You just have to get them to change rooms.

On the other hand, it’s incredibly hard to get people to change the box that they’re accessing content through. There are numerous barriers to overcome. It’s like getting people to put their coats on, go outside, and go into another house — just to go into another room. (which right now is alot like the one they just left!)

One of the tenets of my speaking engagements is that the future is now arriving alot faster than it used to. While the next new thing is steadly inching up the Adoption Curve, the next-next new thing is on its heels. And sometimes it passes it.

In the near future, we’re going to see major market failures with sharp dead-on technology that SHOULD be embraced. All because we’re putting the new stuff out before people have had a chance to look at the “previous” new stuff.

Kindle, with all its imperfections, is a big step. We’ll see what the next move is.

And since I’m late — here are some of the sharper thoughts from around the net about the Kindle:
—Where’s My Jetpack reminds us of another overhyped item that would change our lives and is now a novelty way of doing overpriced city tours.
—Seth reminds us that he’s always thinking outside of the box (and I think he may have missed the train because of it.)
–And Slate has some good thoughts. 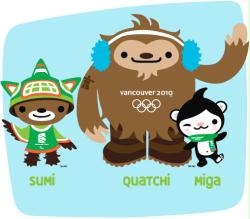 Not to be outdone by the freaky seizure-inducing 2012 London Olympic logo — Vancouver (who’s hosting the 2010 Winter Games) has rolled out some creepy mascots.

God Save the Queen.

A recent survey from Anderson Analytics has some interesting thoughts from senior marketing execs.

Concepts such as the Long Tail and Six Sigma are on the way out.

You know what’s really out?

Building your entire marketing plan on buzzwords that will be passe in a few months.

Buzzwords don’t build business success. A strong comittment to the brand and your customers do.

Thanks so much to the organizers and the person who nominated me.

A salesguy got in contact with me this morning in reference to a service we’re looking at signing up with. I typed the following as I was on the phone with him.

Why would you start out this call with the most boring information? I don’t care how long your company has been in business. I don’t care what companies just signed up with you. Let’s talk about my company instead of yours.

I swear, if you use the word “leverage” one more time, I’m coming through the phone at you.

Is this call really necessary? We filled out your online contact form because we are almost ready to buy. We just need a proposal. Why are you trying to sell me something I’ve already decided to buy?

What are you doing in addition to talking to me? I can hear you doing something else. I’ve stopped listening to you and I’m trying to figure it out.

Why did you just ask me for my phone number and my email? You just called me and you have the online contact form that I filled out.

This bad call is not out of the ordinary. I look at new products and services all the time and sit through these calls about twice a month. They’re all similar to this one.

When the woman at the register handed me the receipt and explained to me like I was mentally challenged how I should log onto the Internets and take the customer satisfaction survey, I just was mildly annoyed.

It was when I walked away and she shouted after me “Make sure you give me good marks!!!” that I decided to log on and tell corporate that I was “extremely dissatisfied”.

Thank you for being a Mediaweek customer. Neilsen Business Media, Mediaweek’s publisher, is committed to keeping its customers informed via email about products and services from third party advertisers that might be of interest to them. Each email will be preceded by the name of the company offering the product or service, so that you know the source and purpose of the message before opening it. If you do not wish to receive these informative emails, please register your preference by following this link…

I’m glad they’re watching out for me by making sure I’m “informed” by sending me spam.

No matter how much you think your list might like it…
Or how “informative” you think it is…
Or how much someone is greasing your pockets to let them “borrow” your list…
…if I didn’t ask for it and you send it to me, it’s spam. And you’re a spammer.

A media and marketing trade magazine should know that. Maybe they missed my pizza spam post.

Interesting article in this month’s issue of Fast Company.

Alex Frankel is the author of the soon to be released book — “Punching In: The Unauthorized Adventures of a Front-Line Employee

“. His two years of research for the book involved him taking a series of entry-level jobs and exploring the way that front end employees and the company’s relationship with them impacts the organization.

It’s the same reason that I used to get frostbite on my fingers when I had to “front” the merchandise in the frozen food section at Winn-Dixie. Or the joy that I experienced cleaning out the grease sludge collector on the grill when I was a short-order cook. — I was just researching a future book. — Anyway…

Frankle actually applied and worked at various retail outlets such as Container Store, Gap, an Apple store, and others. He discovered what people with common sense already know: Good people on the floor sell products and management has to find and cultivate good people.

But, as you may have discovered, there is a lack of common sense in the business world today.

Even in small companies, management tends to forget how the employees in the trenches work. Or even worse, they DO remember what it was like when they were in the trenches. Today, if management is making decisions based on their entry-level experiences, they’re making bad decisions. The world, the market, and customers are vastly different in 2007 than in 1997, 1987, or whenever management was paying their entry-level dues. As Frankel says, “There’s no doubt about it: You get a different view from the ground floor than from the corner office.”

It’s a part of marketing that so many companies forget but is so essential. No matter how slick the marketing plan, true marketing success lies in the few moments of interaction between the customer and whoever (or whatever) you’ve placed on the front lines to deal with them.

Management needs to learn how to put that part in place before any of the other parts.

Hopefully, the right people will read Frankel’s book and take his lessons to heart. It looks to be an interesting read.